CAPE MAY, NJ – Today, the MV New Jersey, one of three vessels in the Cape May – Lewes Ferry fleet, returned home following nearly a year-long dry-docking, which involved a comprehensive overhaul and repowering at Caddell’s Drydock and Repair Company in Staten Island, New York.  The MV New Jersey’s new EMD (Electro-Motive Division) engines are expected to reduce emissions by approximately 40%.  The total cost of the dry-docking and overhaul project, including the cost of the new engines, was $20.2 million – including a $3.0 million grant from the Federal Transit Administration.

“We are excited to have the MV New Jersey back and we know our customers will be happy to have her back, too.”  said Heath Gehrke, Director of Ferry Operations for the Cape May – Lewes Ferry.  “This repowering and the renovations during this dry-docking were the most comprehensive, complex, and expensive Ferry project in more than two decades.  With continued pent-up demand for vacation travel post-COVID, she’ll definitely be a welcomed addition to our schedule.” 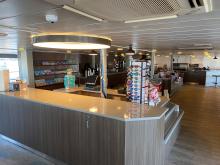 The repowering initiative has several goals, one of which is the replacement of the old, World War II-era Fairbanks-Morse engines for which it is increasingly difficult to find replacement parts.  But the primary reason is to drastically reduce the amount of pollutants this old technology emits.

Gehrke also noted that the Ferry expects to save approximately $130,000 per year in maintenance costs associated with old engines. The existing Fairbanks Morse engines are overhauled every 10,000 hours compared to every 30,000 hours for the new ones.

The MV New Jersey was equipped with two Fairbanks Morse 38D8-1/8 propulsion engines with a power rating of 2,060 horsepower each.  Nearly 50 years old, these workhorse engines are approaching 100,000 operating hours or the equivalent of 1.5 million miles.

The Federal Transit Administration’s (FTA) Passenger Ferry Grant program resources are awarded based on factors such as the age and condition of existing ferry boats, terminals, and related infrastructure; benefits to riders, such as increased reliability; project readiness; and connectivity to other modes of transportation.  The repowering component of this project will increase reliability of the service, improve operational capability by permitting better maneuverability, and reduce maintenance needs.

About the Cape May – Lewes Ferry
The Cape May – Lewes Ferry is owned and operated by the Delaware River and Bay Authority, a bi-state governmental agency created by Compact in 1962.  The Ferry is open year-round and has carried more than 43 million passengers since its inception on July 1, 1964.  The ferry service, which connects Victorian Cape May, New Jersey, and historic Lewes, Delaware, transports approximately 275,000 vehicles and nearly 1 million passengers annually.  For schedule, rates, and other program information, please visit the ferry’s website at www.CMLF.com, or call toll free, 800-643-3779.  Like us on Facebook or follow us on Twitter @CMLFerry.