"I look forward to working with the dedicated men and women of the department to further our mission of public service, crime prevention, highway safety and emergency preparedness."

NEW CASTLE, Del. – Today, Delaware River and Bay Authority officials announced the selection of Wayne E. McFadden of Berlin, New Jersey to serve as the agency’s new Police Administrator, with the rank of Colonel.  Mr. McFadden, who has more than twenty-five years of law enforcement experience, officially began his duties on October 23, 2022. 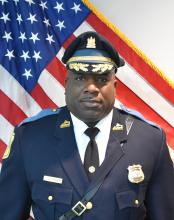 “I appreciate and value the confidence that the Commission and executive management have in my abilities to lead and manage the Delaware River and Bay Authority’s nationally accredited police department,” McFadden said.  “Public service is an important part of my career.  It’s a great opportunity to use the myriad of skills and knowledge that I’ve gained throughout my law enforcement career to make a difference.  I look forward to working with the dedicated men and women of the department to further our mission of public service, crime prevention, highway safety and emergency preparedness.”

As the Police Administrator, Colonel McFadden is responsible for the management and administration of the Authority’s Police Department, which is comprised of 61 sworn officers and support personnel.  “Mr. McFadden’s expertise and leadership abilities make him an outstanding candidate to lead our police department,” remarked Thomas J. Cook, Executive Director of the Authority.  “He is a distinguished law enforcement professional who will bring passion, versatility, and energy to the job every day.  I am pleased Colonel McFadden accepted the opportunity to lend his talents, leadership abilities and operational skills to our police department.  He’s a great addition to our management team.”

Colonel McFadden joined the DRBA Police Department in November 2014 as a Patrol Officer.  He quickly rose through the ranks to serve as both a Sergeant and Lieutenant – with stints managing both the Delaware Memorial Bridge and Cape May Troop Operations.  In October 2020, he was again promoted to the rank of Captain and carried out the duties of the Department’s Chief of Staff.  Two years later, he was promoted to Lt. Colonel and served as the Deputy Police Administrator. For 18 years, Mr. McFadden worked in the City of Camden and Camden County Police Departments, serving in a variety of roles including Executive Officer, Southern District Commander, Investigative Bureau Commander, and Training Unit Commander.

Mr. McFadden earned a Bachelor of Science degree in Administration of Justice from Thomas Edison State University and a Master of Administrative Science from Fairleigh Dickinson University.   A U.S. Army Veteran, Mr. McFadden is a certified NJPTC Police Instructor, certified by both the Delaware Council on Police Training and the New Jersey Police Training Commission.  He is also a graduate of the N.J. State Association of Chiefs of Police Command and Leadership Academy and the Penn State Justice and Safety Institute Leadership and Command Program.

About the Delaware River and Bay Authority
The DRBA, a bi-state governmental agency created by Compact in 1962, owns and operates the Delaware Memorial Bridge, the Cape May- Lewes Ferry, and the Delaware City – Salem Ferry Crossing.  The DRBA also manages corporate and aviation properties through its economic development powers - two airports in New Jersey (Millville Airport and Cape May Airport) and three in Delaware (Wilmington Airport - ILG, Civil Air Terminal and Delaware Airpark). All DRBA operating revenues are generated through the bridge, ferry and airport facilities.  For more information, visit www.drba.net.